This testimony on AB 3042, International Workers Day (Santiago), was presented before the California Assembly Education Committee on March 21, 2018. 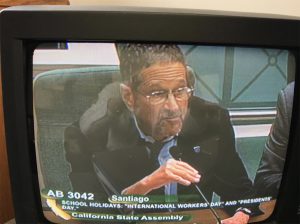 Good afternoon Mr. chair and members of the Assembly Education Committee. As Mr. Rapp said, my name is Fred Glass. Thank you for the opportunity to say a few words about the importance of May 1 as a workers’ holiday and why we should adopt it in California.

May Day, or International Workers Day, should be understood as belonging to every worker everywhere. It celebrates the birth of the movement for the eight-hour work day: a seemingly impossible goal at a time, in the 19th century, when 10- and even 12-hour days were common, six and sometimes seven days a week, in many industries.

It would right a historic injustice for the holiday to finally be celebrated officially somewhere here in the USA. That’s because this country is where the events occurred — strikes and demonstrations by a largely immigrant workforce in the 1880s — that began the movement for the eight-hour day, which was only crowned with success 50 years later with passage of the Fair Labor Standards Act.

Today, when labor and immigrant rights are under attack in other states and at the federal level, in Congress and in the courts, and above all by the president of the United States, California can lead the way to a positive, educational alternative to these anti-worker, anti-immigrant policies by bringing this holiday home.

Helping students understand where their basic workplace rights came from is crucial to protecting them today and in the future. These rights were hard won, often at the cost of workers’ jobs, blood, and lives. It is not a coincidence that the National Labor Relations Act, providing peaceful conflict resolution in the workplace through collective bargaining, was passed in 1935, a year after a wave of general strikes witnessed injuries to hundreds and in some places thousands of workers and the deaths of dozens.

There is a direct correlation over the past 40 years between the decline of union density in the workforce and the rise of economic inequality. Working people standing together, immigrants and native-born, to face down unfair employment practices and economic inequality, is what built the prosperity of this country.

A May Day holiday and appropriate labor history educational exercises surrounding it would provide students — many of whom already work — with an appreciation for what it took to create workplace rights and what they stand to lose if those rights are eliminated.

In short, the merits of the holiday fit closely with what California stands for today as an island of sanity under the Trump administration. I urge you to support AB 3042.

Right-wing media freakout over the bill: